CHICAGO, April 25 (Reuters) – Three highly pathogenic avian flu viruses that have infected poultry and wild birds in the U.S. Midwest appear unlikely to present a significant risk to humans. But the presence of the viruses in North America has scientists scrambling to understand their potential long-term threat.

One of the viruses, H5N2, has already led to the slaughter of millions of turkeys and chickens, as commercial farms try to control the spread of the virus.

No humans have yet become infected, but scientists say it is possible that someone in direct contact with sick birds might catch the virus, though it is extremely unlikely that an infected human could pass the disease on to another human.

“Most of the time, these viruses don’t have human disease potential, but obviously you need to be very careful,” said Dr. Stephen Morse, an expert in emerging infections at Columbia University. “Nowadays, you can’t say anything about flu with certainty.”

Avian flu, which infects poultry, is caused by an influenza A type virus and is often spread by free-flying waterfowl, such as ducks, geese and shorebirds.

Once the virus reached North America, it mutated, mixing with North American avian influenza strains to create the new viruses now being seen. The H parts, which are highly pathogenic in poultry, originated in Asia, and the N parts come from North American, low pathogenic, avian flu viruses, said Dr. Rubin Donis, an associate director for policy and preparedness in the Centers for Disease Control and Prevention’s influenza division.

The U.S. Department of Agriculture is still seeing the original H5N8 virus, but it has also identified two strains of mixed-origin viruses, both of them highly pathogenic. One is the deadly H5N2 virus. The other is an entirely new H5N1 virus that has so far been found in only a handful of the recent cases.

Because much is still unknown about these new viruses, the USDA and the CDC are conducting detailed analyses that include sequencing the viruses’ genomes. A key question they hope to answer is whether the viruses might mutate and become human viruses.

“This is something we need to avoid: it is something that could happen and which we have to look for,” said Dr. Jurgen Richt, an expert in avian influenza at Kansas State University.

Richt said scientists also need to find out whether the viruses are mutating when they come from a wild host into domesticated poultry.

Although infections with H5N1 viruses have been rare, past strains have sometimes caused severe disease and death in people who became infected through close contact with infected birds or prolonged contact with infected people. Since flu viruses evolve and often swap genes, the concern is that they could gain the ability to transmit easily among people, which could trigger a global pandemic.

Donis said the CDC is currently conducting studies in ferrets, which are used as surrogate models for humans, to see how the viruses behave in mammals and whether they can spread easily to animals in nearby cages.

One good sign already is that the H5N2 virus does not appear to be able to replicate readily at lower temperatures, which is required for transmission from person to person.

“You will not have a pandemic without a virus that replicates well in the upper respiratory tract and is easily transmitted by droplets,” Donis said. 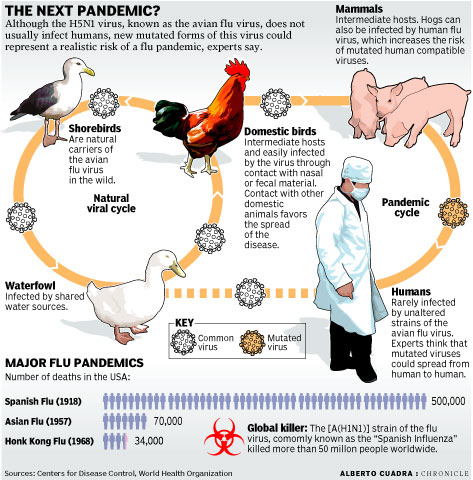 The CDC has already studied a lab-developed version of the avian hemagglutinin, the “H” portion of the viruses, to see if it contains receptors that could easily attach to human cells. In these experiments, the “H” has bound strictly to avian receptors, and not human receptors, another good sign that the virus may not be easily transmissible in people.

“So far, what we see is a typical avian virus that is not expected to be transmissible in ferrets,” Donis said. Results of the ferret studies should be available in a few weeks.

The mere fact that an H5N1 avian influenza virus has arrived in North America, however, represents a significant evolution.

Before 1996, none of the highly pathogenic viruses survived very long in nature. H5N1 viruses had largely been confined to Southeast Asia.

“They always burned out and they were never transmitted long distances repeatedly by wild birds,” Donis said.

Things began to change in 2004/2005 when an H5N1 virus began infecting birds in Qinghai Lake, China, and then spread to parts of Europe and Africa.

“There wasn’t a single H5N1,” Donis said, until this past January, when a new, mixed origin H5N1 virus was isolated in a wild duck in the United States.

The question now is what has changed that makes this virus more capable of spreading in both Eastern and Western directions.