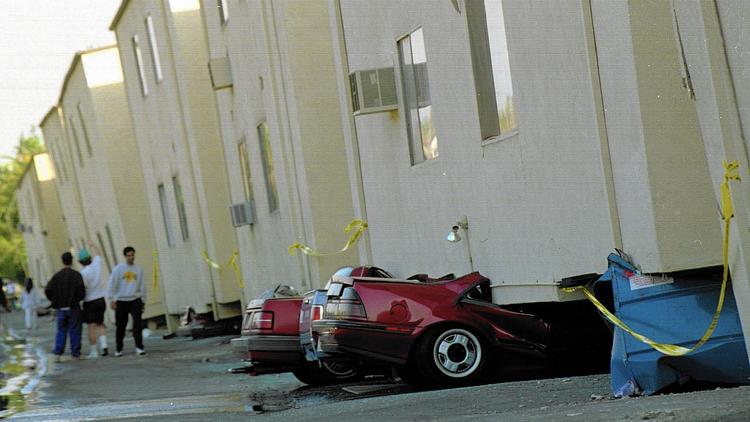 New research released Wednesday suggests that the shaking from “the Big One,” the long-predicted major earthquake on the San Andreas fault, could trigger additional large temblors on nearby faults, intensifying the overall seismic impact.

The study suggests that such a quake “could presage a flurry of ‘other Big Ones’ on other faults,” said USC earth sciences professor James Dolan, “as stresses related to the original San Andreas fault earthquake are redistributed on other faults throughout Southern California.”
‘The Big One’ Could Trigger More Large Quakes On Nearby Faults, Study Finds
Researchers also determined that quake faults can stop moving for thousands of years. However, at some point, the pent-up energy stored in rocks will release in a series of sizable earthquakes. Jua…

The study, presented by Dolan at a meeting of the Seismological Society of America in Pasadena, focuses on whether earthquakes are generated in “super cycles.” A super cycle refers to when a large number of quakes rupture on a single fault system in a relatively short period of time in seismic terms, over a matter of decades or a few centuries.

The concept of more than one Big One in a lifetime might feel outlandish to Californians today. But it wasn’t so long ago when this state had more powerful earthquakes more frequently. The San Andreas fault, for example, suffered two major ruptures in the 19th century: a quake of about magnitude 7.5 in 1812 and a much worse, 7.9 temblor in 1857.

The San Andreas fault in Southern California has been quiet since. And the region hasn’t had a true Big One — a quake greater than 7.7 — since 1857.

“This period of relative seismic quietude, during which we have been releasing in earthquakes far less energy than we have been storing from relative tectonic plate motions, cannot last forever,” Dolan said. “At some point, we will need to start releasing all of this pent-up energy stored in the rocks in a series of large earthquakes.”

To better understand where quakes happen and when they hit, Dolan and his colleagues focused on Southern California’s second largest fault, the Garlock fault, which stretches along the northern edge of the Mojave Desert and intersects the San Andreas. Previous studies showed that between AD 250 and 1550, the Garlock fault produced four large earthquakes, probably between magnitudes 7.5 and 7.7.

If you’re in LA and reading this, chances are you don’t have an earthquake kit. Which is to say, you’re living in an astonishing level of denial. Food and water isn’t all there is, folks — If you don’t have first aid, tools, and gloves, your family is good as done.

But there were periods of quiet. One lasted about 3,500 years before the year 250. A new quiet period began after 1550; the Garlock fault has not had quakes large enough to break the surface in nearly half a millennium.

Dolan and his team found that during its active time, the Garlock fault was moving nearly 20 millimeters a year. That’s much faster than the long-term annual average of that fault, between 5 millimeters to 7.5 millimeters.

The calculations show how earthquake faults can essentially stop moving for thousands of years, and then go into a relatively hyperactive super cycle, unleashing seismic strain.

The results of this study can be applied to other faults, Dolan said. “We’re not focused especially on the seismic threat posed by the Garlock,” he said. “This study focuses on the deeper scientific significance, the more general importance of how faults interact with one another over long time and distance scales, and fundamentally on helping us to understand how faults store and release energy.

“These are issues of absolutely basic importance for our understanding of seismic threats from all faults,” Dolan said.

The Garlock fault happened to be a good example to focus on because of the presence of data that show both the timing of prehistoric temblors and the rate at which the fault stores up seismic stress and releases energy through earthquakes.