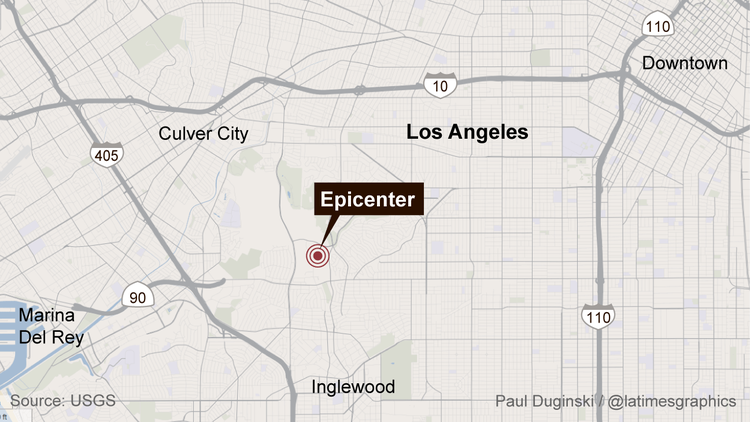 A magnitude 3.5 earthquake was reported Sunday night about a half mile from View-Park Windsor Hills in South Los Angeles, according to the U.S. Geological Survey

The temblor occurred at 9:17 p.m. Pacific time and occurred at a depth of 6 miles, according to the USGS.

Although tremors were felt across large swaths of Southern California, the epicenter was located near the Baldwin Hills oil fields and the Kenneth Hahn State Recreation Area, about eight miles west of downtown Los Angeles.

The proximity to the oil fields left some to speculate on social media that the earthquake owed to heavy drilling in the area.

But Dr. Lucy Jones, a USGS seismologist, wrote on Twitter that the quake occurred near the Newport-Inglewood fault and at a depth “way below the oil fields.”

“The focal mechanism matches the Newport Inglewood fault which was producing [earthquakes] long before we were pumping oil,” Jones wrote.

The epicenter was about 2,000 feet from that of a magnitude 2.5 earthquake which was reported at 4:35 p.m. The smaller quake was a foreshock that typically precedes larger seismic activity, Jones said. A 1.3 magnitude afterschock occurred at 10:37 p.m.

In response, the Los Angeles Fire Department went into earthquake mode, with firefighters fanning out across the city to survey for possible damage.

After crews from all 106 LAFD stations inspected strategic areas across 470 square miles of the city, no damage was identified, according to fire department spokesman Shawn Lenske.