The Italian weather Web site MeteoWeb reports that Capracotta, Italy, saw 100.8 inches of snow in just 18 hours on March 5 — a total that, if verified, would set a new world record for snowfall in a 24-hour period.

However, the reports from Capracotta at this time are not official.

An investigation of the measurement by the World Meteorological Organization would need to be conducted in order for this to go down in the “official” record books, but the WMO does not currently track snowfall for any location. According to Randall Cerveny, WMO’s chief rapporteur of weather and climate extremes, this is because accurate snowfall measurements are fairly limited and have been “markedly difficult” to verify.

But there is hope for an investigation of the Italy total. “The WMO is currently evaluating the addition of world snowfall extremes as a new category for the WMO Archive of Weather and Climate Extremes,” Cerveny said. “We will likely be adding it to the Archive in the near future. When we do so, we certainly will be investigating this interesting report from Italy as a possible record snowfall extreme.” 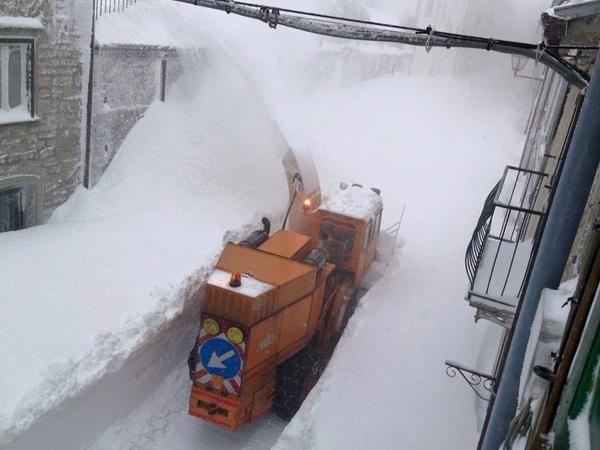 Snowfall records are notoriously difficult to pin down. Official snowfall measurements in the United States involve the use of a “snowboard” — typically just a 16-by-16-inch piece of plywood painted white — which is cleared at the time of each measurement. But even if you use the correct tools, you can still mess up a snow total. “Even making snowfall measurements too often can affect the total snowfall value as snow compression is a critical factor in snowfall measurement,” Cerveny said.

The United States, Canada and Japan have strict snowfall measuring procedures, and reports from these countries have widely been accepted as “world records” by meteorologists, if not officially by the WMO. If Capracotta’s snow total is eventually verified, it would surpass the accepted world record by just over 10 inches – 90.6 inches (about 7.5 feet) on Mount Ibuki, Japan, on Feb. 14, 1927.

Even if the WMO does decide to take up snowfall records, it would be quite awhile for the investigation to conclude. Investigations include both internal committees and climatologists and meteorologists from the observing country (in this case, Italy). “Those committees discuss all aspects of the event (such as equipment, monitoring techniques, site location) and then recommend to the WMO chief rapporteur … whether or not to accept the event as an official world record weather extreme,” Cerveny said. “When that decision is made, we then issue an announcement through the WMO offices in Geneva.”

One recent and notable record investigation by the WMO was the overturning of the world’s hottest temperature — previously 132.8 degrees in El Azizia, Libya, in 1922. The committees found that the measurement was erroneous, which elevated Death Valley’s temperature of 129.2 degrees in 1913 to the world record.