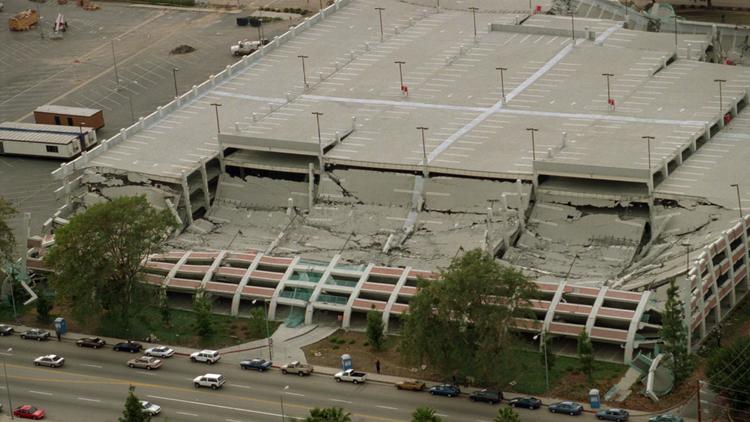 Estimates of the chance of a magnitude 8.0 or greater earthquake hitting California in the next three decades have been raised from about 4.7% to 7%, the U.S. Geological Survey said Tuesday.

Scientists said the reason for the increased estimate was because of the growing understanding that earthquakes aren’t limited to separate faults, but can start on one fault and jump to others. The result could be multiple faults rupturing in a simultaneous mega-quake.

Stated another way, the chance of an 8.0 or greater quake in California can be expected once every 494 years. The old forecast calculated a rate of one 8.0 or greater earthquake every 617 years.

“The new likelihoods are due to the inclusion of possible multi-fault ruptures, where earthquakes are no longer confined to separate, individual faults, but can occasionally rupture multiple faults simultaneously,” said USGS seismologist Ned Field, the lead author of the report.

“This is a significant advancement in terms of representing a broader range of earthquakes throughout California’s complex fault system.”

The report says that past models generally assumed that earthquakes were confined to separate faults, or that long faults like the San Andreas ruptured in separate segments.

But recent large California earthquakes showed how earthquakes can rupture across multiple faults simultaneously. Many are in the Los Angeles area.

Much larger quakes also showed how this could occur, including two that hit the Mojave Desert in the 1990s: the 1992 magnitude 7.3 Landers earthquake and the 1999 magnitude 7.2 Hector Mine earthquake.

It also happened in the 7.2 earthquake that hit along the California-Mexico border on Easter Sunday in 2010. Scientists said the border quake directed tectonic stress toward Southern California, putting the region at a higher risk for a future quake.

Data showed the April 4, 2010, quake and its aftershocks triggered movement on at least six faults, including the Elsinore and San Jacinto faults. Those faults run close to heavily populated areas in eastern Los Angeles County and the Inland Empire.

A crack in the pavement cuts across a street in a neighborhood of Napa that was affected by Sunday’s quake.

Dramatically, proof of earthquakes jumping fault boundaries occurred in the massive 9.0 earthquake that hit off the Japanese coast in 2011. “The 2011 magnitude 9.0 Tohoku, Japan earthquake also violated previously defined fault-segment boundaries, resulting in a much larger fault-rupture area and magnitude than expected, and contributing to the deadly tsunami and Fukushima nuclear disaster,” the report said.

“As the inventory of California faults has grown over the years, it has become increasingly apparent that we are not dealing with a few well-separate faults, but with a vast interconnected fault system,” the report said. “In fact, it has become difficult to identify where some faults end and others begin, implying many more opportunities for multifault ruptures.”
cular fault ripe for a massive earthquake is the southern San Andreas, which Tuesday’s forecast said was “most likely to host a large earthquake.” This section of the fault has a 19% chance of having a 6.7 or larger earthquake in the next 30 years centered in California’s Mojave Desert.

The chance was lower on the northern section of the San Andreas fault near San Francisco — just 6.4% — partly because of the relatively recent 1906 earthquake. (Still, quakes are relatively ready to go on the nearby Hayward and Calaveras faults in the Bay Area.)

The new forecast was released as part of a publication known as the Third Uniform California Earthquake Rupture Forecast. The USGS said it was created and reviewed by dozens of experts in seismology, geology, paleoseismology, earthquake physics and earthquake engineering. These predictions are factored into building codes and used by the California Earthquake Authority to evaluate insurance premiums.
It has become difficult to identify where some faults end and others begin, implying many more opportunities for multifault ruptures. – USGS report

Experts say they can’t predict the date and time that the next big earthquake will come, but they’re getting better at modeling the possibilities. Tuesday’s forecast considered more than 250,000 fault-based earthquakes; the last forecast considered about only 10,000. The latest calculations use about 300 earthquake faults; the 2007 forecast relied on 200 faults, and the original 1988 report was based on only 16.

“As we’ve added more faults, we realized we’re not dealing with separate, isolated faults but really an interconnected fault system,” Field said in an interview.

“The message to the average citizen hasn’t changed. You live in earthquake country, and you should live every day like it’s the day a Big One could hit,” Field said. “ But what it really does help us do is refine our estimates for those designing critical facilities: hospitals, schools, bridges.”

A higher probability of megaquakes should be a concern for those constructing large structures.

“ If you’re dealing with a large bridge or maybe a large skyscraper that might not even notice a small earthquake, the waves from a magnitude-8 might be particularly problematic,” Field said.

“We are fortunate that seismic activity in California has been relatively low over the past century. But we know that tectonic forces are continually tightening the springs of the San Andreas fault system, making big quakes inevitable,” Tom Jordan, director of the Southern California Earthquake Center and a co-author of the study, said in a statement.