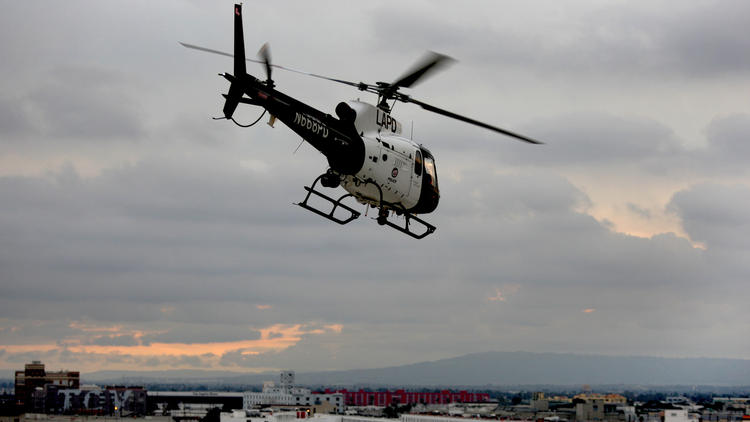 They seem as common as squawking gulls, and true Angelenos may not even bother to look up when one of the LAPD’s 17 helicopters rattles their windows, its spotlight searching for a car-jacked Camry or an assault suspect hiding under a jacaranda.

In a city of 469 sprawling square miles, few doubt that more bad guys would get away without the nation’s largest police helicopter fleet to help chase them.

Now the LAPD is pioneering the use of helicopters to stop crimes before they start.

Tapping into the data-driven policing trend, the department uses heat maps, technology and years of statistics to identify crime “hot spots.” Pilots then use their downtime to fly over them, on the theory that would-be criminals tend to rethink their nefarious plans when there’s an airship hovering overhead.

What some see as an innovative tool for keeping the peace, however, others call a deafening intrusion.

As iconic as palm trees, LAPD helicopters — “ghetto birds” as Ice Cube calls them — have played a “good cop-bad cop” role in popular culture for decades. The benign “whirlybirds” that flew out of a San Fernando Valley airport on crime-solving missions in the 1950s TV series of that name became ominous “helicopter gunships” in dystopian author Mike Davis’ “City of Quartz,” and omnipresent LAPD “spinners” in Ridley Scott’s “Blade Runner.”

The Los Angeles Police Department began exploring the deterrent approach a few years ago with a new model called predictive policing that deployed officers and patrol cars to areas where data suggested crime was more likely to occur.

Criminologists say the use of helicopters is a natural, if highly unusual, expansion of that policing strategy. 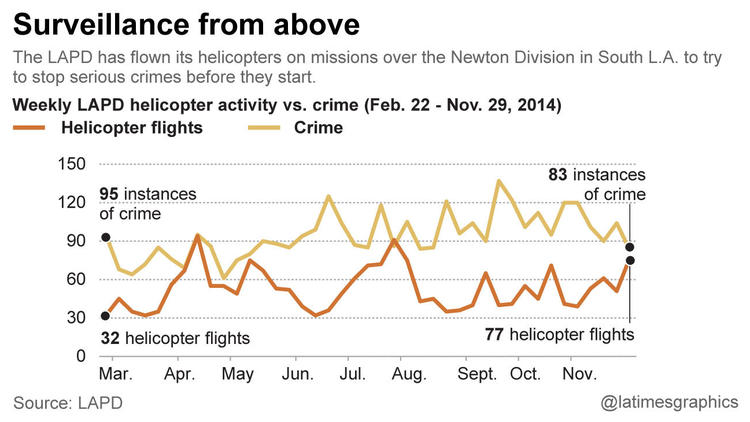 So far, LAPD officials say, the stats show the strategy is having a positive effect. Months of data show that the number of serious crimes reported in the LAPD’s Newton Division in South L.A. fell during weeks when the helicopters conducted more flights.

During the week of June 21, 2013, the helicopter unit flew 36 times over Newton, which saw 125 crimes reported in that period. During another week in July, the number of flights rose to 91 and the recorded crimes dropped to 86.

The most pronounced difference came last September. During the week of Sept. 13, when the helicopter unit flew over Newton 65 times, the division recorded 90 crimes. A week later, the number of flights dropped to 40 and the number of reported crimes skyrocketed to 136, with rises seen among almost all types of crime, including burglary, car theft and thefts from vehicles.
Capt. Gary Walters looks over two LAPD helicopters being prepared for service on the department’s helipad in downtown Los Angeles.

The LAPD has implemented its helicopter policing strategy in its Newton Division in South L.A. and its Devonshire Division in the San Fernando Valley. 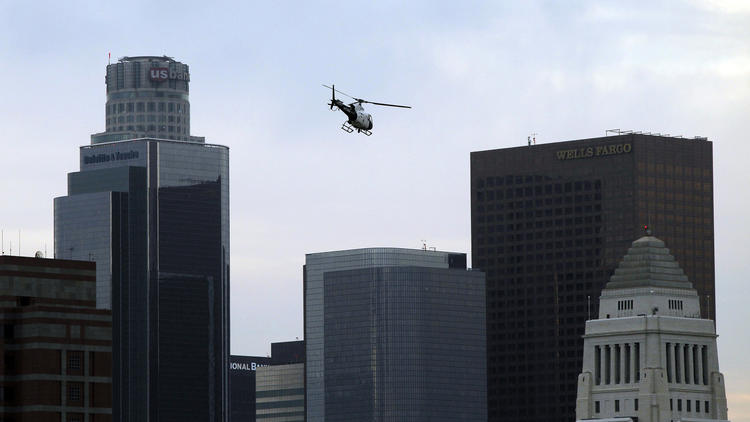 Craig Uchida, a policing consultant who analyzes data for the LAPD and offers advice on crime prevention strategies, says it is too early to prove a definitive link between the flights and drops in crime. But the results so far, he said, are encouraging.

“Certainly it provides another layer and blanket of security for our folks,” says Capt. Ed Prokop, who until recently oversaw the Newton Division.

In March 2014, a pilot was checking a hot spot where, on Friday nights, crooks had been stealing vehicles, burglarizing cars and assaulting people, says Sgt. Tony DeMolina, a veteran LAPD pilot. While watching for such activity, the pilot spotted something else: strobing light spilling from an illegal rave inside a massive warehouse.

The ravers would park their cars in nearby alleys — easy prey for would-be thieves. After the raves ended, DeMolina said, the attendees would themselves become targets.

Once the pilot connected the raves to the ongoing crimes, DeMolina alerted Newton officials. Extra patrols shut future raves down, he says.

Pasadena police say they have adopted a variation of the strategy in which they send their department helicopters over areas that have seen recent upticks in burglaries or other crimes. Officials with the L.A. County Sheriff, Orange County Sheriff and Long Beach police say their helicopter pilots are generally aware of areas of recent criminal activities and may fly overhead while on assignment.

But few agencies use as methodical an approach as the LAPD.

“You are deterring the criminals but you aren’t getting rid of them and their intent,” he says. “Those criminals could strike in a different time and place.”

Andrew Guthrie Ferguson, an associate professor of law at the University of the District of Columbia, agrees that helicopters have a “great deterrent value.” But, he says that during a time of increased public concern over police militarization, a loud and visible helicopter could make residents feel like the police are an occupying force.

Police departments increasingly say that one of their goals is to “engage the community” and a hovering helicopter can get in the way of that, Ferguson says. “[Americans] are sending a message that they don’t want our police militarized, they don’t want that occupying army feel. And the use of helicopters fits in that frame.”

Peter Bibring, a senior staff attorney for the American Civil Liberties Union’s Southern California chapter, said using helicopters to monitor neighborhoods could set a problematic precedent for how the LAPD conducts other surveillance.

Critics challenged the LAPD last year when it received two drones from Seattle police. The department does not use the drones — they remain locked away until the Police Commission decides if and how they might be used — but they have still sparked privacy concerns.

“If this experience is successful,” Bibring says of the helicopters, “this could be a preview of how one day the LAPD could use drones for this purpose.”

Walters, commander of the LAPD’s air support unit, says the program was recently expanded to include the department’s Devonshire Division in the San Fernando Valley.

Cmdr. Sean Malinowski, who helped develop the predictive policing model the LAPD now uses, says the helicopter project represents how innovative policing has become. He says there is “untapped potential” for similar projects.

“The future of this thing is going to be how creative cops can be in using predictive or other data-driven strategies,” he says. “That gets people pumped up to do something different. It kind of injects life into the crime fighting.”