Lynchburg, Virginia, plummeted to 11 below zero Friday morning, setting a new all-time record low for any day of the year. The previous record was 10 below zero on Jan. 21, 1985, and Feb. 5, 1996. Impressively, Lynchburg’s temperature records go all the way back to 1893.

At least 72 daily record lows were set Friday morning from Connecticut to Florida to as far west as Indiana, including major cities such as New York, Baltimore, Washington, Pittsburgh, Atlanta, Charlotte, Miami, Detroit and Cincinnati.

All-time February record lows: Cleveland has broken its all-time record low for the month of February, reaching 17 below zero. The previous February record was minus 16 on Feb. 10, 1899, in the nation’s worst arctic outbreak in modern memory. It is also Cleveland’s coldest day since Jan. 19, 1994, when the city set its all-time record of 20 below zero.

A Kentucky Mesonet site east of Richmond, Kentucky, reported a low of 32 below zero. According to the Kentucky Climate Center, this ties the all-time February record low for the state set in Princeton on Feb. 2, 1951. Kentucky’s all-time record low for any month and day was 37 below zero in Shelbyville on Jan. 19, 1994.

Pittsburgh hit 10 below; the city has never before hit double digits below zero this late in the winter.

Rochester fell to -11ºF just before midnight on Friday evening. It is Rochester’s coldest temperature since hitting -12ºF on Jan. 10, 2004. It’s also the latest double-digit-below-zero reading (-10ºF or colder) on record in Rochester. The previous latest date was Feb. 18 in 1979.

Crestview, in the Panhandle, dipped to 19 degrees Friday morning.

According to the National Weather Service in Chicago, the Windy City has not had a high temperature below 10 degrees this late in the winter since 1963. And on Wednesday, Chicago’s high was only 8 degrees. The average high for Feb. 18 in Chicago is 36.

Thursday morning lows: Lows in the single digits were recorded as far south as northern Georgia and northern Alabama. Widespread subzero lows were reported as far south as Kentucky and Tennessee. Teens and 20s below zero were recorded in parts of Minnesota, Wisconsin and northern Michigan. A few spots in northern Minnesota were in the minus 30s and even the minus 40s. The coldest temperature reported was minus 43 degrees near Cotton, Minnesota.

Thursday highs: Bitterly cold weather lasted all day across much of the eastern half of the country Thursday.

Highs in both Lexington, Kentucky, and Charleston, West Virginia, were 40 degrees below average based on preliminary data. Highs were at least 30 degrees below average from Chicago to Nashville to Atlanta to Pittsburgh. Atlanta’s high only reached 28, the first time Georgia’s capital has had a subfreezing high temperature this late in the season since March 2, 1980.

The high of 5 below zero at Gaylord, Michigan, was the coldest daily high ever recorded on any date in that northern Michigan town.

This tweet from winter weather expert Tom Niziol of The Weather Channel shows the origin of this frigid air mass. The red line traces the air mass back to Siberia in Russia. It then crossed over the North Pole on its way to Canada and into the United States. This is what meteorologists sometimes refer to as the “Siberian Express”. 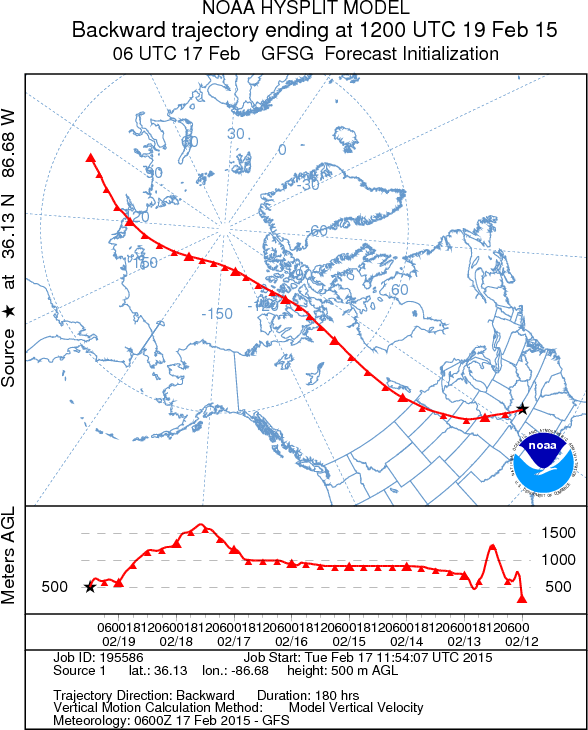