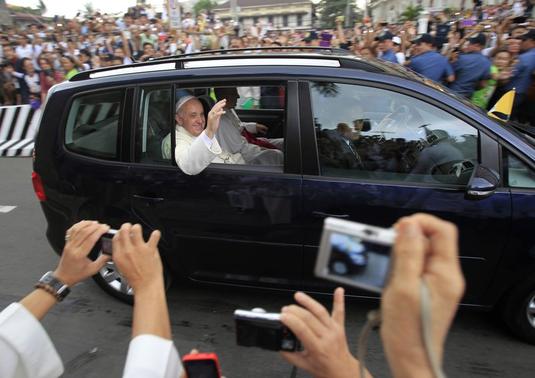 (Reuters) – Pope Francis has electrified Roman Catholics in the United States with the open, accepting tone he has brought to the role, and his first visit later this year is expected to draw more than a million followers eager to set eyes on him.

The leader of the 1.2 billion-member church will also face a challenge in improving relations with conservative U.S. Catholics, who have expressed dismay at his shift in focus away from issues like abortion and same-sex marriage, which the church has long opposed but Francis contends need not obsess about.

The city of Philadelphia began preparations more than a year ago for the pontiff’s visit in September, at the end of the weeklong World Meeting of Families. Some 1.5 million faithful are expected to turn out for an open-air Mass on the steps of the city’s main art museum, a crowd that could fill a 1.5 mile (2.4 km) stretch of parkway along the Schuylkill River, said Donna Farrell, executive director of meeting.

“What fascinates me is the degree to which he has captured the attention of Catholics and non-Catholics. I find myself in social meetings with non-Catholics talking about the Pope, and he’s the subject of great hope,” said Mark Mullaney, chairman of Voice of the Faithful, a lay Catholic organization founded in Boston in 2002 in response to the clergy sex abuse scandal. “He’s opened doors and windows that have not been open in a long time, and encouraged discussion.”

Some 74 percent of non-Catholics in America view Francis favorably, with some 93 percent of Catholics reporting a favorable view, according to a 2014 poll by the Pew Research Center. Both findings were well above his 60 percent favorability rating worldwide.

Francis is also more popular with the roughly 76 million U.S. Catholics than his predecessor, Benedict XVI, according to Pew, though not so beloved as John Paul II, who held the papacy for more than a quarter-century until his death in 2005. He was elevated to sainthood in 2014.

A vocal advocate of human rights, John Paul II drew crowds of over a million at outdoor events during his five formal U.S. visits, while Benedict’s 2008 trip was less grand in scale.

Francis has won praise for his decision to live in a simple Vatican guesthouse and not the palace his predecessors have called home for centuries. He has also captured Americans’ attention by showing a more tolerant side of the church, famously answering a question on homosexuality: “If a person is gay and seeks God and has good will, who am I to judge him?”

Like his predecessors, Francis has used his influence to improve diplomatic relations between countries and played a key role in last month’s restoration of U.S.-Cuba ties. Francis wrote personal letters urging rapprochement to U.S. President Barack Obama and his Cuban counterpart, Raul Castro, and allowed the Vatican to host secret talks.

Before his visit to Asia this week, Francis urged a similar thaw between North Korea and South Korea.

While Francis has not broken on church teachings on homosexuality, with Catholic doctrine condemning homosexual acts, his willingness to discuss that and other issues has upset some conservative U.S. Catholics.

His Philadelphia host, Archbishop Charles Chaput, stirred a debate last year when he told an audience that the meetings on family issues convened by the Vatican had confused some people about church teachings, adding that “confusion is of the devil and the public image that came across was confusion.”

Some saw the comment as a criticism of Francis, although Chaput has since said those words were taken out of context and that he was “overjoyed” about the Pope’s visit.

“Pope Francis is fond of ‘creating a mess.’ Mission accomplished,” Tobin wrote of the family meetings.

“There is definitely a tension,” that Francis will likely want to soothe, said Fr. James Bretzke, a professor of moral theology at Boston College and, like Francis, a member of the Jesuit order.

Some conservative Catholics denied that Francis had changed the church all that much, saying that more progressive Catholics were too quick to conclude that his willingness to discuss controversial topics signaled looming changes in church dogma.

“It’s despicable that so many left-wing Catholics would jump on this bandwagon. I’m disgusted by the way Catholics who know better have sliced and diced his words,” said William Donohue, president of the Catholic League. “If you take a look at his positions on, let’s say marriage and abortion, there is nothing that is in any way different from his predecessors.”